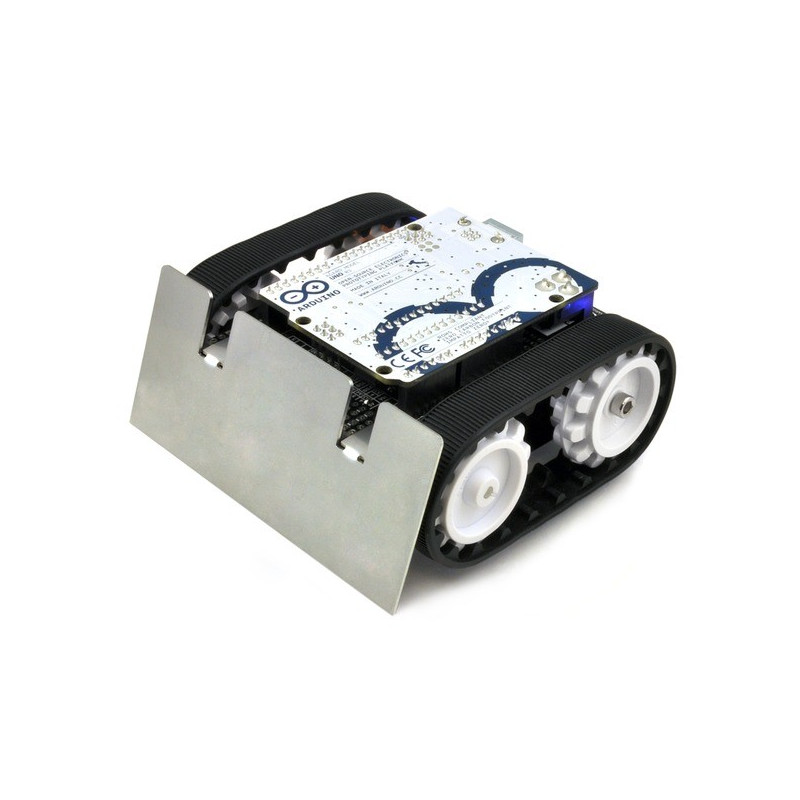 Warring robot education for self-Assembly. The platform has the ability to install the module to Arduino Uno or Leonardo. The kit includes: tile page with the possible inclusion of Arduino chassis with gąsienicam and bumper look cleaner.

Kit for building robot fighting minisumo controller-based Arduino Uno or Leonardo. The kit includes: main Board with the ability to connect to Arduino, chassis with tracks and plow - that is bumper to fight other robots. For the operation of the robot is also required: pair of motors series, micro, four batteries AA and module Arduino.

The controller allows you to build robot fighting minisumo based on the popular module Arduino Uno or Leonardo. It offers dual-channel driver engines, voltage regulator, and a 3-axis accelerometer. Detailed description of the PCB: link. Set specifications for the manufacture of the mechanical chassis of the robot minisumo class. The kit includes: caterpillar, basket for the battery and mounting plate. Accurate description of the mechanical elements: the link. Package also includes a metal plow, that is the bumper, to fight other robots. Accurate description and size: link. The Zumo robot has been designed in such a way that the dimensions of the assembled structure was placed in a square 10 x 10 cm, which is consistent with the international rules of fighting robots. The following components are not included in the kit in order to leave a choice of the designer. He can pick according to your needs the parameters of the engine and to select the corresponding version of the Arduino. In addition, the user can use the items you already have, such as the popular Arduino module.

The company Pololu provides a whole series of micro-motors with gearboxes. They differ in capacity and volume reflection. The most popular among designers of robots fighting are versions of the HighPower with gear 30:1 and 50:1.

To power the robot requires four alkaiczne batteries AA (large fingers). We recommend you to use NiMH batteriesbecause they have the possibility of multiple charging.

The kit works with both version of Uno and Leonardo. Compatible also older models with the same distribution of conclusions, for example, Arduino Duemilanove. In addition to the above listed items necessary for the operation, the user can select additional components. This: Allows you to define the white line located on the edge of the ring. Thanks to appropriate software, the robot can stop itself from falling outside the valid region.

The optical elements to determine where the enemy is. Most often used digital sensors about a distance of 40cm. Their advantages are small size and speed of measurement.

30 other products in the same category:

Order and pay in 2:34 for
Same day shipping!