Raspberry Pi Model B (512MB RAM) is a miniature computer that can successfully replace a large office device. The module allows you to process video in high definition. Has: HDMI, audio Jack, RCA, slot for memory card and connector, Ethernet, 2x USB 2.0.

The Raspberry Pi device was developed as alternative to large and expensive computers. In situations that do not require large computing capacity, and requirements posed by equipment is, first of all, the compact size and low power consumption, the raspberry works fine. This miniature computer has a performance level of a Pentium II, but for normal work it is enough only a screen (monitor or TV), memory card, power supply microUSB (or, for example, a charger for the phone) and a computer keyboard. In the case of using graphics, you should also connect a mouse. 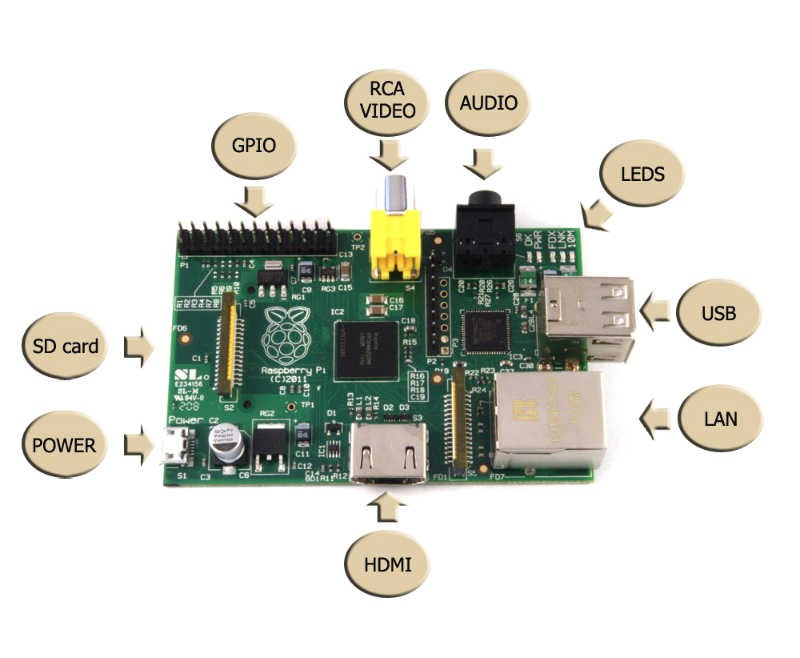 Built-in DC Jack HDMI allows you to connect a TV or monitor, and broadcast in the resolution Full HD (1080p). In the absence of HDMI, the user has at its disposal an RCA Jack (popular Auto).

Audio is via a 3.5 mm Jack that are used in popular speakers and headphones. Sound can also be transmitted through cable HDMI, if the TV or monitor is equipped with was momentum.

The creators Rasbpery Pi declined from the hard drive. His role took on a much easier, less emergency SD memory card. With this solution the computer is lightweight and consumes much less energy. Through the card, install the operating system, in addition, it serves as a place to store data.

Raspberry is the main communication interfaces, which can be found in office computers of class PC. In addition to the previously listed connectors audio and video the user has at his disposal:

In addition, the system includes interfaces that are typical for systems based on mikrokontrolerach. This:

As a power source, the system uses the microUSB connector. In practice, this means that running Rasbperry Pi you use, the popular smartphone in the world, the charger with the connector.

Raspberry Pi works among other with the following operating systems:

The Raspberry Pi, and any PC, requires some basic accessories to work with. Most of them we have in our offer:

7 other products in the same category:

Order and pay in 0:36 for
Same day shipping!