Considered LED strip RGB WS2812B vs WS2813 - what are the differences? 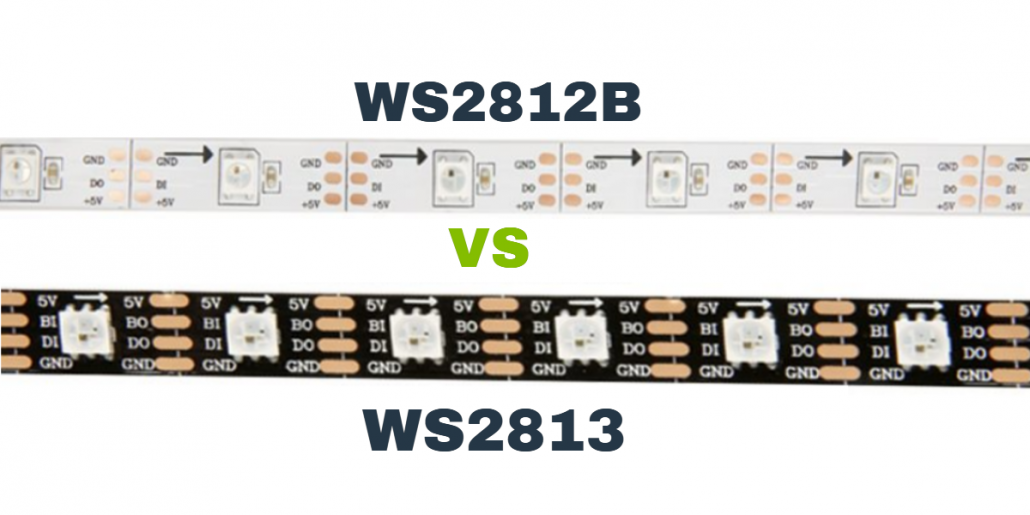 Due to the low voltage operation, high brightness and good color rendering, WS2812B has become one of the most popular LED panels and base flashing projects each Creator. An improved version of the WS2812 - allows WS2812B intelligent control LED light. In this version of regional management and system is integrated directly in RGB LED RGB 5050. As that is a panel digital INDICATOR, each addressed led has a built-in controller that can individually control brightness and color. This means that any indicator may have a different color from that next to it. Thus, it allows you to create beautiful and complex light effects.

The latest model of this popular series of panels LED is WS2813. This is an updated version of the WS2812B. As WS2812B, WS2813 also has a control circuit and RGB chip built-in 5050 RGB LED, each led can be controlled individually. As WS2813, by the way, on the background of its popular predecessor, the WS2812B? Being an improved version, we can expect better than WS2812B, at least in certain ranges. Let's compare these two versions. 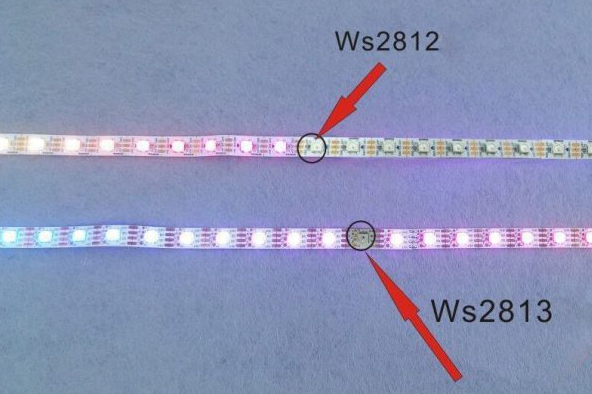 Despite the damage of a single diode in the panel WS2813, the rest will continue to work.

The most important difference between these two versions of their bypass surgery that bypass faulty units. One of the biggest benefits of WS2813 and WS2812B it has not, is that the first one is the version with dual signal, continuous signal transmission in case of interruption of the signal. This means that if any indicator on the panel is broken, the circuit will remain closed and the other LEDs will continue to burn. As long as no other neighborhood indicator will not be damaged, the rest will work properly. However, when one led is damaged on the panel WS2812B, the circuit is interrupted, and the rest of the LEDs (which, in turn, are located on the panel behind it), it will cease to glow.

This is because WS1812B has only one data signal, and a broken led interferes with the work of other LEDs. A panel WS2813 has 2 data signal, which means that any fault in the circuit it will not affect signal transmission if damaged 2 neighboring led. Not bad when running just one led. In this case, the rest will be fine, while You can think about repair. Given this comparison, the panel LED WS2813 is more reliable and is ideal for both professionals and Amateurs.

Stunning effects panel display WS1813 become apparent when one LED panel WS2813 and WS2812B strip is attached to a measuring ruler and with her quickly always welcomed.

Another advantage WS2813 over WS2812B, it's faster refresh rate, it reaches 2000 Hz, while the WS2812B has a lower frequency is 400 Hz. This means that WS2813 produces excellent display effects without distortion, which can be captured on HD cameras.

The reset time is 250µs WS2813 that allows you to improve the performance at low frequencies the LED panel WS2813, allowing the processor mikrokonterolera less used.

As for strip WS2812B as WS2813 can be used the same microcontroller.

Just starting to work with LED strips? Please note that they don't start to Shine when they are connected only to the power supply. In contrast to the standard passive LEDs to make it glow harder. The strap needs to be connected to the driver through which should be sent the command for the LEDs. This can be, for example, Arduino and Raspberry Pi. Controller, "notify", each individual LED what should be the color and brightness with the help of any program installed on it.

LED strip WS2812B has a built-in microchip that allows them to communicate with just one cable. This means that a large number of LEDs can be controlled with a single spike on the controller. LED strips have 3 contact power supply (+5 V), ground wire (GND) and pin data (Din and Dout). The power contacts and ground are used to replenish the panel, and pin data to be connected to the controller (e.g. Raspberry Pi or Arduino).

There should not be problems with running belts that requires a power supply of 5 Volts, 5-voltowe the output of the Arduino. But if you decide to control the INDICATOR uses the Raspberry Pi or ESP8266, which send signals at a power of 3.3 V, you must convert the 3.3 V data signal on the 5-volt signal through the logic level Converter.

Yes. The necessary libraries to control the WS2812B and WS2813 and create unusual lighting effects.Libraries should vary depending on the type of controller used. They can be downloaded from GitHub.

Both the LEDs consume about 60 mA of current at maximum brightness, so the power supply can stay the same. As always, depending on the number of LEDs used in panel or panels, the required power supply will be different. It is important to choose the source of power that will meet the requirements of bands to maintain their brightness. Each led consumes about the same amount of current, i.e., 60 mA at maximum brightness, so that the panel with 60 LED s, you will need 60 x 0.06 = 3.6 And rated power and at maximum brightness. If you are using a USB 2.0 port, which gives 0.9 A, you can easily feed strips 0,9/0,06 = 15 LEDs.

WS2813 more expensive - but not by much. The difference is not great, and many distributors have already discontinued sales of WS2812B. WS2813 already on the market for some time, but we expect that it will become more popular and will eventually replace WS2812B.

We've compared two digital LED strip WS2812B and WS2813. Depending on the requirements of Your project in our online store you can find, in addition to the digital LED panels, as well as analog.

We hope this guide was useful to You. To successfully create!