The Raspberry Pi is very popular, jednopłytkowym computer (SBC). Most know, of course, the Raspberry Pi 3 and previous versions that have become recognizable around the world. In the range there are also small modules. Raspberry Pi Zero allows you to attach a computer for very small projects. Zero life, too in a later version - Zero In - with wi-fi and Bluetooth.

What is on Board?

Raspberry Pi Zero (Zero) differs from the Raspberry Pi-3. Getting started with version Zero can make you a little more problems than three, because a lot of connectors requires adpterów to connect a monitor or mouse. In our offer available kits containing the necessary elements, such as All in One.

Unlike previous models of the Raspberry Zero does not use the standard HDMI connector. Has a built-in miniHDMI to save some space. To connect with monitor or TV, you must use the appropriate adapter or cable. 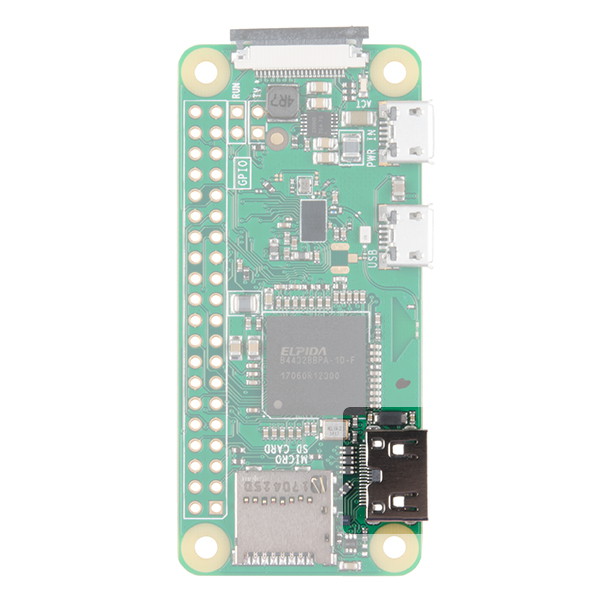 Raspberry Pi-3 and other models have 2 to 4 traditional USB connectors that allow you to connect various devices such as a mouse, keyboard, disk drive, etc. To Raspberry Pi to Zero, in order to save space used microUSB OTG. Zero has the same Broadcom chip IC, the original Raspberry Pi a and A+. It connects directly with USB providing the functionality of OTG. And the models B, B+, 2, and 3 use the built-in USB hub to connect multiple USB devices.

In order to connect a standard USB connector for Raspberry Pi is Zero, use the OTG adapter. 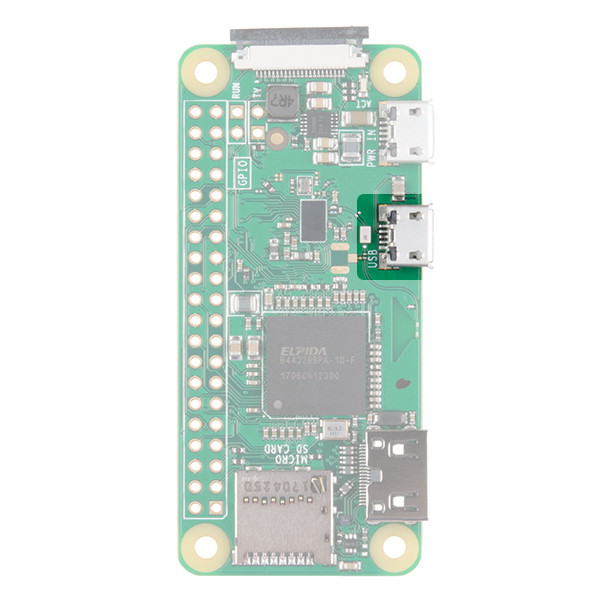 When connecting a USB device it is recommended to use an active Hub for their food. Wireless keyboard and mouse work better if they are supported through a single USB key.

Also, as with other the Raspberry, the Zero is powered through a micro usb connector the voltage from 5 V to 5.25 V. 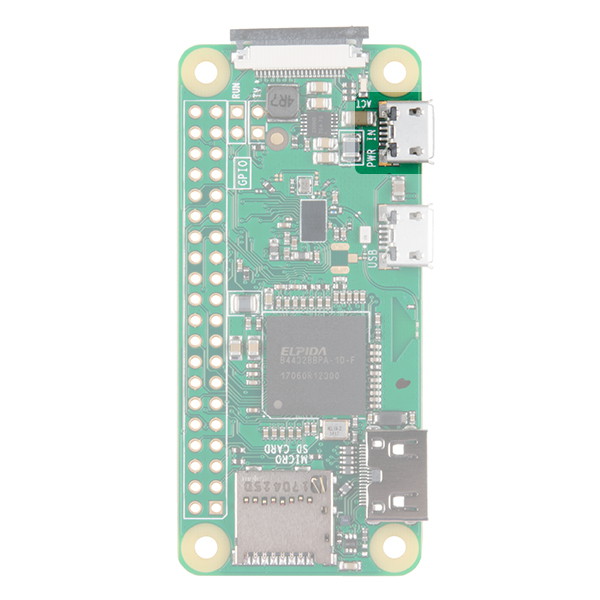 Zero, like other models, uses a card micro-usb as the disk containing the operating system. 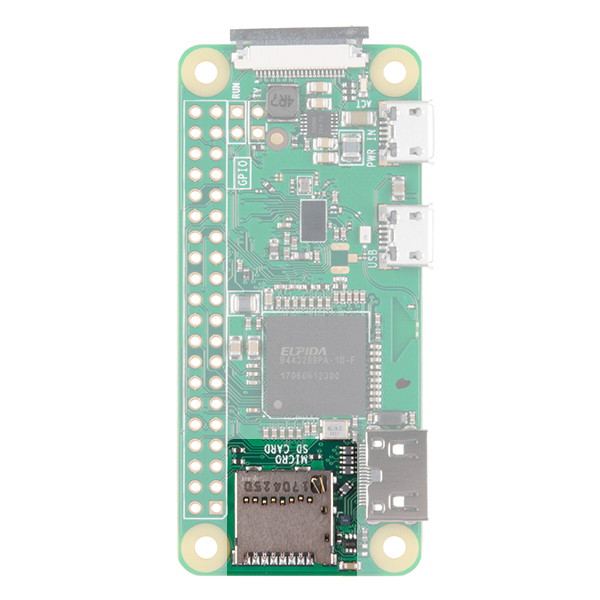 The Raspberry Pi is Zero in the version In there is wireless wi-fi 802.11 n and Bluetooth 4.0, just like the Raspberry Pi-3. Because of this, no need additional adapter wi-fi or Bluetooth.

The Raspberry Pi is Zero, since version 1.3 has a built-in camera connector the CSI. But the connector differs from that applied in the large version. Zero has a 22-pin 0.5 mm. in order to use the camera for Raspberry Pi should apply appropriate tape. 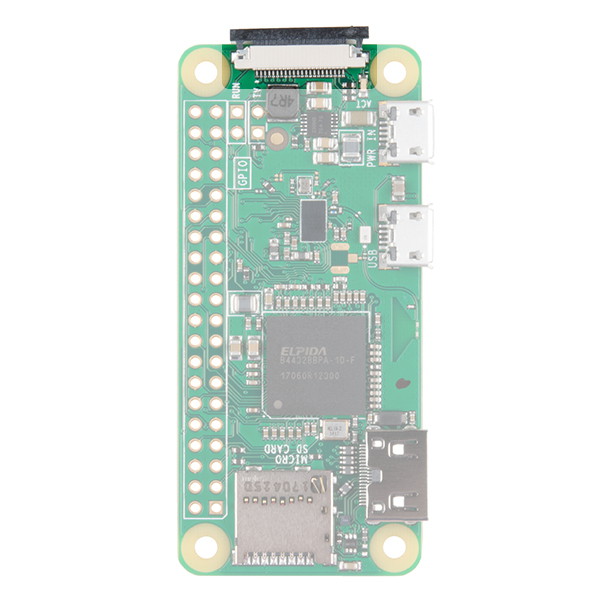 As all models of the Raspberry, also the Zero is derived GPIO pins. They offer additional functions such as I2C, SPI, UART, etc. Model compact 40 piinowe wlutowanych connector without connectors. They can solder yourself, or buy the version equipped with connectors. 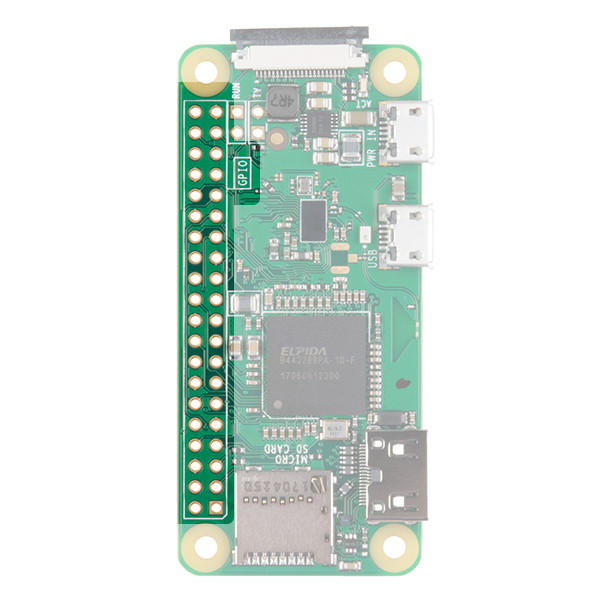 Zero also has 4 extra pin marked TV and Run. TV connectors allow you to connect RCA jacks instead of HDMI. Contacts Run you can connect a button that will work like a reset of the device

Depending on use Raspberry Pi to Zero can be connected so minimalist, but its connection can also be annoying when you need to connect standard devices like a mouse, keyboard and monitor.

Raspberry has two options to install the operating system.

The Foundation Raspberry created software NOOBS (New Out Of the Box Software). This is the official installer for the Raspberry Pi. The newest card with NOOBS operating system available in our store, work with any version of the Raspberry Pi 2, 3, zero and Zero V. If you want to put NOOBS on their own, you don't need any additional software. After you download the NOOBS archive file, extract it, then the contents of the upload folder directly on the previously formatted microSD card. When placed in the Raspberry system should start. With his level, you can install one of the available operating systems, follow the instructions on the screen. 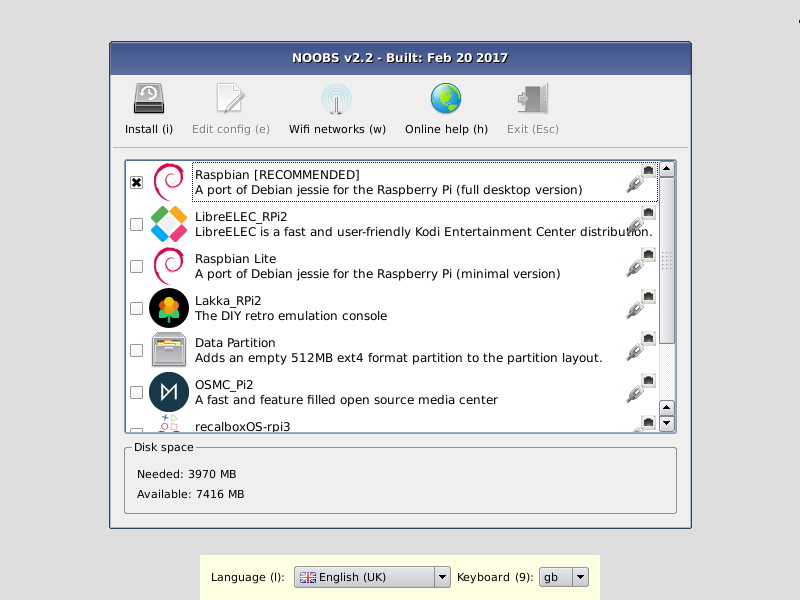 To set the image sysstemu we recommend software Elcher. Everything required to install included in one application. You need to run the program, select memory card, choose the system image and click "Flash". After you download it using Elcher system, it is necessary to translate the card to Raspberry and connect the power.

For Mac users we recommend this app Aplle Baker Software. In the left part of the window, select the memory card and to the right, under Pi Ingrediants: IMG Recipe, select the desired system image. After you Restore Backup system be recorded on a map. 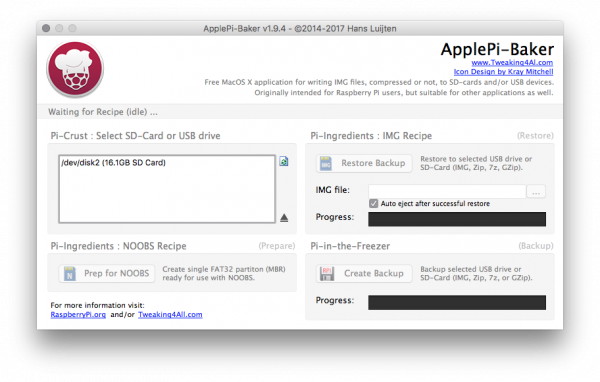 Below we provide basic support for the operating system Raspbian. Other systems based on linux should work the same way.

Raspbian and most Linux-based Raspberry. It has a graphical interface similar to Windows or MacOS. So there is no need to memorize the commands messages. Many things can be done without using them.

After a restart in the upper left corner you can see six icons. The first, "Raspberry" works the same as "start Menu" in Windows. After clicking appears a list of installed apps and turn off. The second icon resembling a globe, this browser. Yet it is Menedźer Files, Terminal, and Wolfram Mathematica.

Each account linux is password protected. By default, the user Raspbiana "PI" and password "raspberry". Remember that for security to change these settings on first use. To do this, open terminal and enter:

You will be prompted to enter a new password. Due to this, the device will be more protected from other users and from viruses.

To connect the Raspberry Pi to Zero In on the Internet, you need to click on the WiFi icon in the top right corner on the desktop Raspbiana. You should see a list of available networks. When you select one of them you are connecting. If the network is password protected, you will first see a window for entering the password. Change the wi-fi icon indicates the correct connection. The addition of wi-fi is not necessary, but can be useful, for example, when updates.

Another thing you should do when you first start the software update. Packaged apps are constantly updated. Linux uses a package Manager is able to update all software. To run it, enter in terminal:

It causes to obtain the latest information on packages and tell the dispatcher that you need to update.

Sudo is (superuser) is the certifying authority for changes

Apt-get package Manager. in this case, we give him the command update (update).

This command downloads and installs the updates. The procedure takes very little time. In addition, requests confirmation that you want to generate by typing: Y.

The command to shut down the computer. The option -r restart. Now means instant reboot (after entering 15 computer wyłączyłby in 15 minutes).

What happens if you do not type sudo? The system will report that you have insufficient rights to make changes.

Now that you know the basics monikomputera Raspberry Pi for example, the Raspberry Pi is Zero. Recommend that you continue with Linux, in addition, you can learn the basics of Python learn how to use the GPIO pins, build, server, home NAS, Media Center, gaming console or many other projects.